If You Haven’t Seen Steve Vai’s Electrifying “Hotel California” Tribute To The Eagles, You’re Missing Out 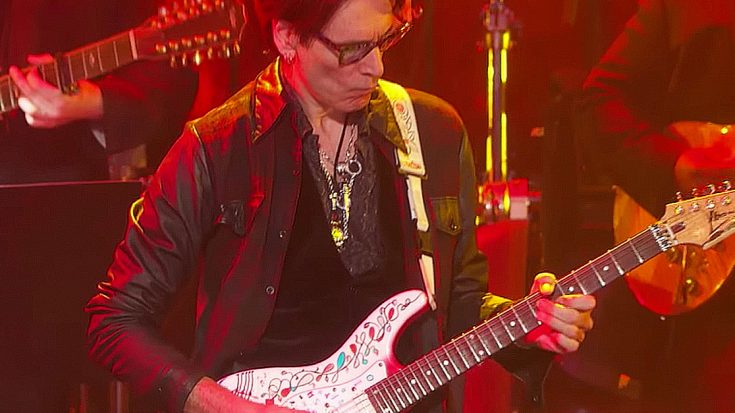 The Kennedy Center Honors were in December, celebrating a handful of cultural icons in the art world with a weekend-long ceremony that recognized each recipient for their contributions to American culture. The Eagles, originally slated to receive the Kennedy Center Honors in 2015 but deferred it to this year in the wake of Glenn Frey’s medical problems, finally got their moment in the sun as fans and friends converged on the Kennedy Center Opera House to pay tribute to America’s favorite rock band with a series of all star musical tributes in their honor.

Fun Fact: The song is considered the most famous recording of the band, and its long guitar coda has been voted the best guitar solo of all time.

Their seminal “Hotel California” took center stage as Colombian singer-songwriter Juanes, with the help of master guitarists Steve Vai and Steuart Smith, delivered an electrifying cover of the 1976 classic that despite not actually being performed by the Eagles still manages to elicit the same spine tingling reaction that makes you want to hop in your car and cruise down the 101 at sunset as the original and judging by the look on the faces of Don Henley, Timothy B. Schmit and Joe Walsh, “Hotel California” as performed by Juanes, Steve, and Steuart was as close to a home run as it gets. Glenn, wherever you are, we hope you liked it just as muuch!