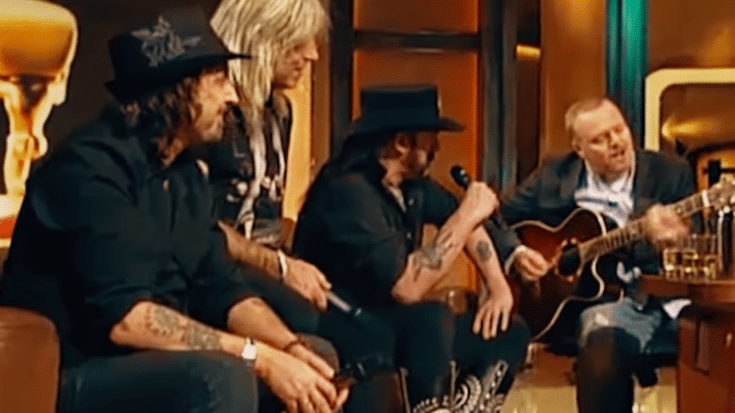 How refreshing to watch Motorhead frontman Lemmy Kilmister just spontaneously jam out Christmas tunes on acoustic guitar while guesting on a talk show! Looking back at this guest appearance with his band on the German TV talk show “TV Total Show” with host Stefan Raab, it looks like he may have had a wee bit to drink while doing this segment, but hey! that’s Lemmy and that’s what makes this extra awesome.

Host Stefan Raab himself is a musician too, aside from being a host. Raab actually got his big break when he wrote the popular hit single spoofing football coach Berti Vogts. Raab was actually considered the “most powerful man in German entertainment television” in the 2010s. Raab taught himself to be a multi-instrumentalists and he can play the guitar, drums, piano, ukulele, and wind instruments pretty well, so it’s really no surprise that he swished out an acoustic guitar and impressed Lemmy with his skills, Lemmy even joked after the song that Raab has gotten the job to be part of the band.

Lemmy and Raab sang  ‘Run Rudolph Run’ which was originally popularized by  Chuck Berry in the 1950s. Lemmy’s rendition though is more amped up with his gritty vocals and heavier guitar riffs.

The holiday spirit may be innate to Lemmy as he was born on Christmas Eve in the Burslem area of Stoke-on-Trent, Staffordshire. His cover of “Run Run Rudolph” was actually done with Billy Gibbons and Dave Grohl was released in 1998 and was part of the compilation done by Wendy Dio – wife of the late, great Ronnie James Dio – titled We Wish You a Metal Xmas.

The cover is not musically pitch-perfect and it’s rowdy, gritty, and all over the place but that is just how Christmas songs become very rock n’ roll! And Lemmy shows us in this video how he could just whip out this Christmas tune with as much fun on a couch in a talk show as he does it on a stage.