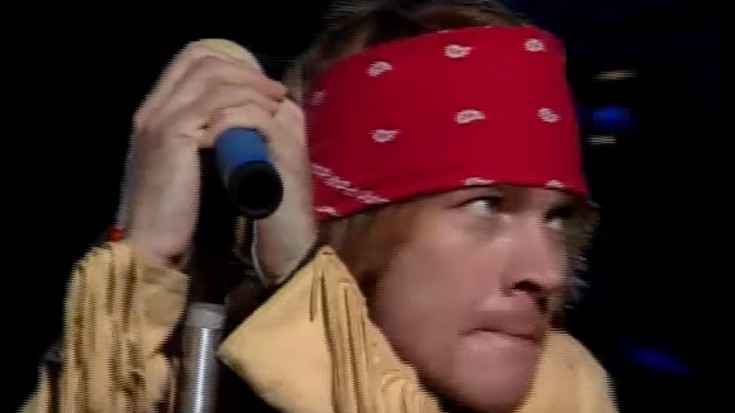 With the success of their 1991 albums Use Your Illusion I & II catapulting them into rock superstardom, Los Angeles rockers Guns N’ Roses singlehandedly introduced a young generation of fans to Bob Dylan with their rendition of ‘Knockin’ On Heaven’s Door’.

Guns N’ Roses turned the old cowboy tune written by Bob Dylan into a massive arena rock ballad and it’s one of their most amazing pieces to date!

Their Use Your Illusion tour featured this particular stop in Tokyo in 1992, and quite honestly – this jarring rendition of the old cowboy classic stole the show that night!

From the Alice Cooper cover woven into the intro, to Axl’s cowboy getup and Slash’s blistering guitar solos, their live performance of ‘Knockin’ On Heaven’s Door’ is a testament to the machine that was Guns N’ Roses.

The boys even threw in a few brief ska, reggae, and gospel interludes! Any band fearless enough to improvise a cover – live – is truly a force to be reckoned with.

It’s pretty safe to say that for a while, Guns N’ Roses was on top of the world and it’s never been as clear as it was in this amazing live video. We’re still totally blown away by their talent over 20 years later, and you will be too!