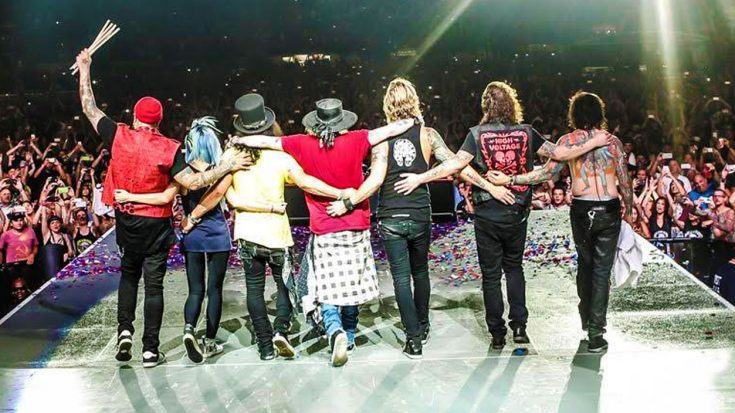 Where Do We Go Now?

Now almost a month into their Not In This Lifetime… Tour, Los Angeles rock legends Guns N’ Roses seem to be having a great time on tour; everyone’s getting along, Axl’s showing up on time (early, in fact!), and the crowds are leaving venues happy with the performance they paid to see. With only a month left to go on their North American leg of the tour, fans are left wondering; when the lights go down and the curtain falls on one of the most highly anticipated reunion tours in rock history, what happens next? Does Axl retreat into seclusion, never to be seen again until he forms some other weird reincarnation of Guns N’ Roses with a mishmash of random musicians? Do Duff and Slash walk their separate ways into the sunset?

According to the band’s production manager Dale “Opie” Skjerseth, none of the above. In fact, this is just the beginning; Skjerseth told Atlanta’s WXIA that the Not In This Lifetime… Tour has no official end date, with tour dates stretching on well into 2017 and Guns N’ Roses as a whole are excited to take the stage with each other night after night for as long as time allows.

So what’s different this time around?

“Everybody’s older. They carry their families with them. They all have to have their spaces. Everybody meets before we go onstage. It’s a meeting point – and that’s where the chemistry happens.”

No one seems to be having more fun or appreciating the experience more than Axl Rose, whose growth and maturity as a band leader and as a person have been noticed and praised by both Skjerseth and Rose’s bandmates. Now that the unpredictability of Axl’s moods has been removed from the equation, we’re left with a reinvigorated Guns N’ Roses that’s ready and willing to take on the world for the second time in 30 years – and judging by this summer’s performances, they just might do it.