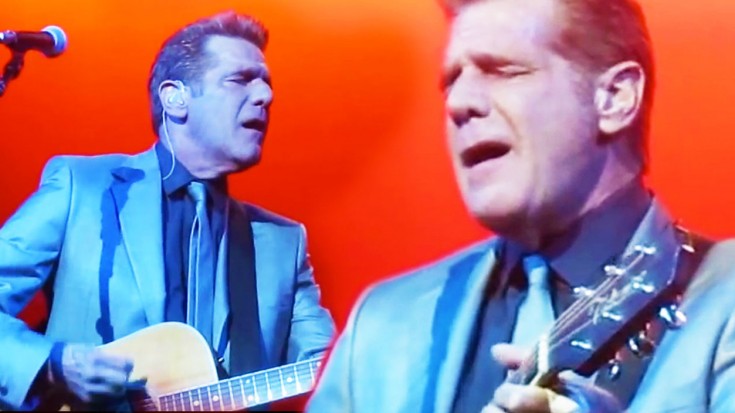 Proving himself yet again to be one of the greatest singer songwriters of all time, Glenn performed his Eagles classic “Tequila Sunrise” in 2012. With those magical facial expressions, that passion and that voice, our heart breaks knowing that we will never hear Glenn play live again…

Interesting Quote: I believe that was a Glenn title. I think he was ambivalent about it because he thought that it was a bit too obvious or too much of a cliché because of the drink that was so popular then. I said, ‘No-Look at it from a different point of view. You’ve been drinking straight tequila all night and the sun is coming up!’ It turned out to be a really great song.” – Don Henley

Written by Glenn and Henley in 1973 about the comparison between a cowboy’s life on the ranch and an artist’s life on the stage, “Tequila Sunrise” became one of the Eagle’s greatest hits, reaching #64 on the Billboard Hot 100 that same year. Gracing the band’s second album, Desperado, the song was known as Glenn’s very favorite and we can see why.

Granted the video quality was placed in the hands of a most likely intoxicated fan, but it does not take away from the magic that Glenn was able to perform on stage. We miss you buddy…