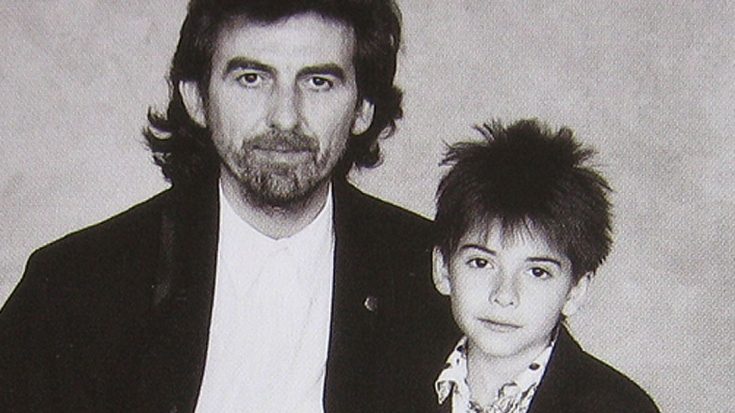 George, Through His Son’s Eyes

When George Harrison died in 2001 after a lengthy battle with throat cancer, he didn’t just leave behind his legacy as one of The Beatles – he left behind his beloved son Dhani, who has since devoted his life and career to preserving his father’s musical legacy while at the same time forging his own. Shortly after George’s death, Dhani appeared in the Concert For George documentary in which he was kind enough to sit down and share some of his most precious memories of his dad, revealing a man who, when at home, wasn’t a rockstar – he was simply ‘Dad’ and as Dhani Harrison tells it, a pretty damn good one.

“He used to say to me every day, ‘You don’t have to go to school today. Do you want to just go on a yacht in the South Pacific and run away forever?'”

From heartwarming tales that paint George as a gentle parent willing to let Dhani explore and create art instead of insisting he join the rank and file of everyday life, to a rebel at heart who refused to let authority figures mistreat or in any way break Dhani’s spirit, George’s portrayal through the eyes of one of the people who loved him the most reveals a side to the former Beatle that was rarely seen by fans and quite often reserved for close friends and loved ones. Sure, kids will always view their parents in the most positive light possible but in the case of the now 38-year-old Dhani, his view of his father comes from a genuine love and healthy respect for George and the lengths he went to to leave the best possible parts of himself with his son – and somehow, that means more than any of his accomplishments as an artist.