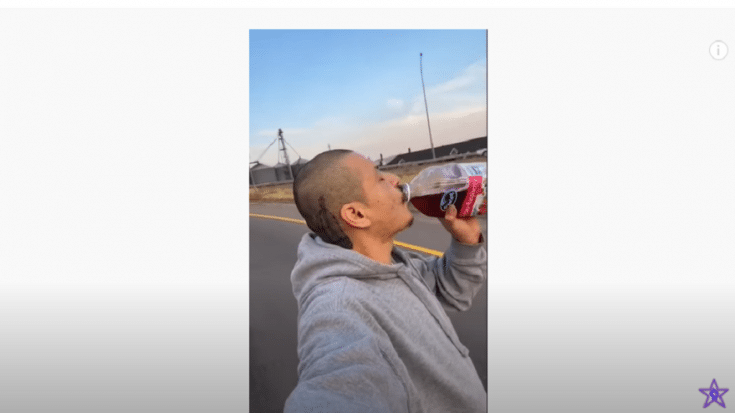 Over a week ago, a man from Idaho Falls named Nathan Apodaca posted a TikTok video of him skateboarding down a highway and drinking a large bottle of Ocean Spray cranberry juice with Fleetwood Mac’s classic hit “Dreams” in the background. It went viral and garnered millions of views.

Thanks to him, the song went to the top of the charts and experienced a resurgence in popularity. Apparently, Fleetwood Mac members loved it so much that Mick Fleetwood joined TikTok just to recreate the clip.

More than being acknowledged by the legendary rocker, Apodaca had another unexpected surprise – Ocean Spray showed up in front of his RV with a brand-new, red 2020 Nissan Frontier Pro-4X pickup full of Ocean Spray Cran-Raspberry juice. They picked a car color that’s similar to the cranberry juice color.

A representative from the company told him, “This is from Ocean Spray to you. Thanks for keeping it positive. The truck is yours. All the Ocean Spray is yours. Congratulations!”

And of course, Apodaca then recreated his TikTok video but this time, with his brand new truck. He told EastIdahoNews.com, “It’s pretty humbling that Ocean Spray reached out and decided to gift me with a cranberry red brand new truck. It’s been a wild ride for sure and it’s awesome that I’m putting out good vibes for everyone right now. I mean I love my Cranberry Raspberry Ocean Spray, so now I have a truckload which is pretty cool!”