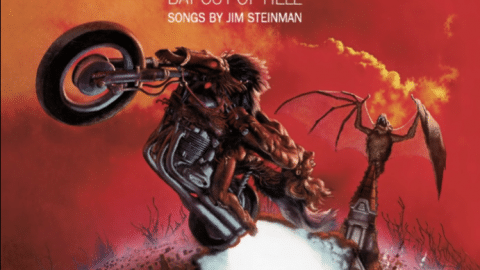 Few can match the impact and influence of Meat Loaf’s stunning debut album “Bat Out of Hell”.

Developed from a futuristic rock version of Peter Pan titled Neverland, it showcased composer Jim Steinman’s appreciation of the musical styles of Bruce Springsteen, Phil Spector and The Who. The record sold over 43 million copies worldwide – making it one of the best-selling LPs of all time and essentially putting Meat Loaf on the map. Aside from being certified 14x Platinum by the RIAA, it also spent a total of 522 weeks in the UK Albums Chart. To this day, it sells around 200,000 copies each year.

Steinman wrote Neverland in 1974 which was performed in 1977 at the Kennedy Center Music Theatre Lab. He toured with Meat Loaf along with the National Lampoon show and the pair agreed that three songs – “Bat Out of Hell”, “Heaven Can Wait” and “The Formation of the Pack” – were simply “exceptional”. Steinman then went to work on them as part of a seven-song LP.

Bat Out Of Hell is often compared to Bruce Springsteen’s musical works particularly Born to Run. One thing that fueled this comparison was the fact that pianist Roy Bittan and drummer Max Weinberg who are members of Springsteen’s E Street Band, played on the Meat Loaf album. Steinman admitted that he found it “puzzling, musically” because “Springsteen was more an inspiration than an influence.” But for producer Todd Rundgren, he believed that the record was somehow influenced by Springsteen’s “rural suburban teenage angst”. In a 2017 interview with Billboard, Rundgren even admitted that he first “saw it as a spoof of Bruce Springsteen” which is what sold the album to him.

Rundgren also played guitar on “Bat Out of Hell” and worked on the arrangements.

Though Steinman and Meat Loaf agreed that it’s a spectacular album, they initially found themselves being rejected multiple times by record companies. They spent a year writing and recording the material and the next two and a half years looking for a label to sign them. Meat Loaf was at his breaking point when they were once again rejected by CBS executive Clive Davis. Cleveland International Records eventually released it in 1977.

Bat Out of Hell is ambitious, outrageous, and excessive. From the production to the songwriting and the delivery, it’s extraordinary. Meat Loaf, unsurprisingly, was extremely proud of his work upon its release calling it “more real than 95 per cent of the records ever made.”

Three songs became the highlight of the album – “Bat Out of Hell”, “Two Out of Three Ain’t Bad” and “Paradise by the Dashboard Light”. It remains untouchable today.