EXCLUSIVE: Axl Rose Appears On Camera With AC/DC Bandmates For The First Time 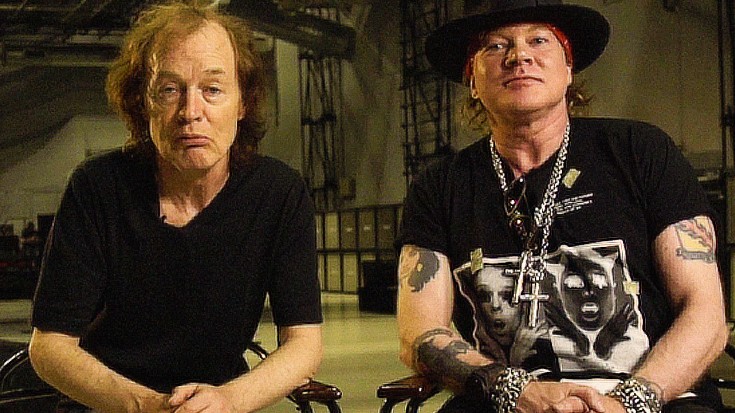 This is a major first in the latest chapter of AC/DC! Just one day after it was announced that they issued over 7,000 refunds in advance of their May 16 show in Belgium, AC/DC’s Angus Young and Cliff Williams appeared on camera with new singer Axl Rose for the first time ever to invite fans out to the band’s European Rock Or Bust Tour dates. In a short video – a mere 25 seconds long – the three express their excitement at getting back out on the road after being sidelined briefly by Brian Johnson’s hearing diagnosis, with Angus extending a warm invite to fans in Portugal to head on out this Saturday for a good old fashioned rock show.

Rose is slated to perform on the European leg of the Rock Or Bust Tour, in addition to a handful of US dates this fall.

This will be AC/DC’s first show with Rose, who reportedly looks forward to meeting the challenge of winning over AC/DC’s fans head on and somehow, this video makes the entire situation a little more real. This is actually happening and hopefully hearing from Angus and Cliff will assuage any fears that AC/DC may not rock quite as hard with Axl at the helm for the next few months. Check it out in the footage below and let us know what you think!