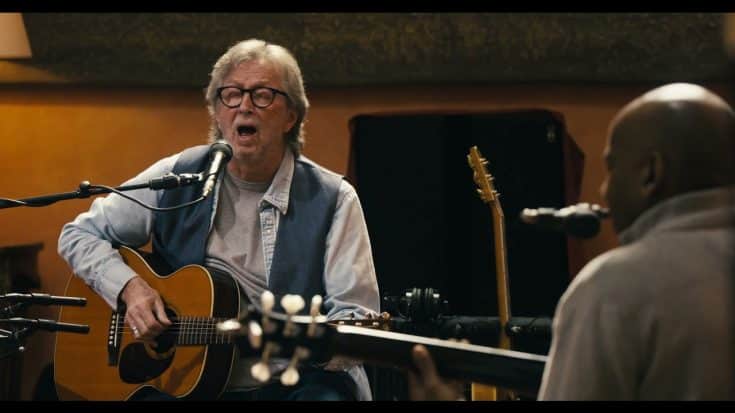 Last year, Clapton collaborated with fellow anti-lockdown Van Morrison and released protest tracks such as “Stand and Deliver” and “The Rebels” as well as one of his own “This Has Gotta Stop,” a song which he voice out his frustrations with the measures put in place to help curb the spread of COVID-19 while criticizing the vaccine.

Clapton also released a song “Heart of a Child” which was co-written by Robin Monotti, an Italian architect and film producer who shares the same opinions with him against COVID vaccines.

The veteran rocker has been publicly vocal about his opposition to lockdown restrictions and vaccinations over the past two years, after receiving the AstraZeneca COVID-19 vaccine and had a “disastrous” experience.

Last summer, Clapton even said that he would not perform in concert venues where proof of vaccination is required.

However, even Clapton’s controversial anti-vaxxer and lockdown views resulted to backlash and losing his friends, he said he hadn’t felt “socially involved” with his own performances in recent years, and his objection to coronavirus measures has helped him find motivation that had been “dormant.”

In a new interview with the Real Music Observer, Clapton shared:

“I got the tip that Van was standing up to the measures, and I thought, ‘Why isn’t anybody else doing this?’”

“And we go back – I’ve known him since we were kids [so] I contacted him [and] said, ‘What do you think? What’s going on?’ And he said, ‘I’m just objecting, really. But it seems like we’re not even allowed to do that. And nobody else is doing it.’” he added.

He described the resulting backlash as “like I’d had a wall built around me,” but added:

“I did make concessions; I did take out lines or change lines a little bit just to pacify those that I really didn’t want to hurt… And needless to say, my family and friends, they got scared, and I think they were scared on my behalf.”

“In the U.K., we have the BBC, and it used to be an impartial commentary on world affairs and state affairs. And suddenly it was completely one-way traffic about following orders and obedience. And I felt really motivated, musically. It instigated something which really was laying dormant. I was just playing live gigs up until the lockdown without really being socially involved in any way.” he continued.

“I have a tool, I have a calling, and I can make use of that. So I set about it and started writing.”