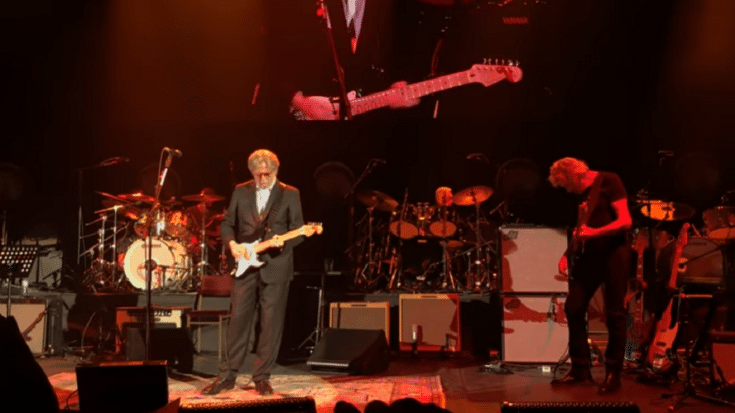 For The Legendary Drummer

Eric Clapton is the only surviving member of power trio Cream – Jack Bruce died back in 2014 and last year, the world mourned the loss of monster drummer Ginger Baker. For his first show in 2020, Clapton gathered an all-star band to pay tribute to Cream’s legendary sticksman and perform an array of Cream classic hits and Blind Faith tracks at the Eventim Apollo Hammersmith in London on Sunday evening.

Clapton and Waters kicked off the show with a cover of “Sunshine of Your Love.” Before launching into the song, Clapton told the crowd: “I called him Peter Edward. I think he’s here somewhere and he’ll be playing music for you tonight and we’re going to help him along. He was a scoundrel, but I loved him and he loved me and that was that. I saw some people get the rough edge of his tongue, but I never did and I feel blessed. That’s why I’m doing this. I miss him.”

The 15-song set featured “White Room” and “Strange Brew” played by Waters, “I Feel Free” by Rodgers and Carrack, and “Badge” by Wood and Henry Spinetti. Winwood powered through a couple of tunes – “Had to Cry Today,” “Presence of the Lord,” “Well All Right,” and “Can’t Find My Way Home.” The show then wrapped up with everyone performing “Crossroads.”

Check out some of the videos below.