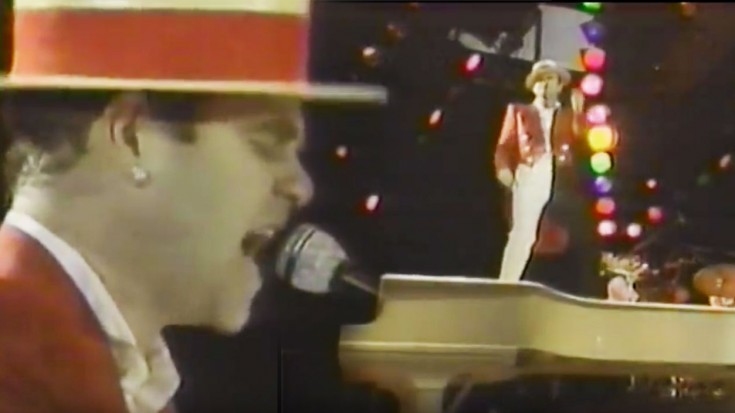 In 1984, the great Elton John wowed Wembley Stadium with classic “Saturday Night’s Alright For Fighting” and took the crowd by storm with his upbeat and fast paced vocals and unforgettable piano skills. The original goal for this song was to create his first ever English rock song and man, he really hit out of the park with this one.

“Don’t give us none of your aggravation, we had it with your discipline. Saturday night’s alright for fighting, get a little action in…”

Songwriter Bernie Taupin wrote this song about his former years, inspired by the social tiffs that would arise at bars in his teens– which Elton was not a part of. Whether they meant to rile fans while listening, this is just one of those songs that you want to throw your body in different directions during that really takes ahold of you.

Interesting Fact:In the liner notes to Elton John’s boxed set, it explains that he recorded his vocal while leaping around and “going crazy.” It was the first time Elton recorded a vocal standing up, and he made the most out of it.

The greatest part of the performance? When Elton gets on top of the piano and starts to take off his jacket and swing it around his head. This has to be one of the greatest live performances we have ever seen of Elton!

Although it seems as though Elton is a bit “out of it” during this performance, he is always wonderful and always will be. “Saturday Night’s Alright” is just one of those feel good songs you can really lose yourself to and we will for a long, long time. Enjoy!

Well they’re packed pretty tight in here tonight
I’m looking for a dolly who’ll see me right
I may use a little muscle to get what I need
I may sink a little drink and shout out “She’s with me!”