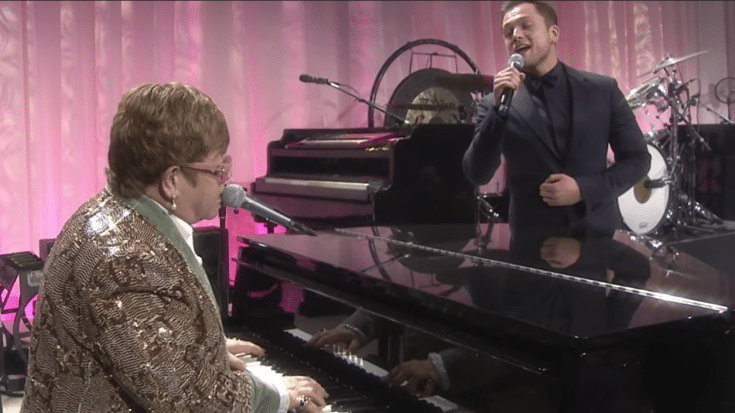 Forget the Oscars – it’s the parties we’re dying to go to!

Last night saw Elton John rock West Hollywood with his 27th annual Academy Awards viewing party, a star studded event to benefit the Elton John AIDS Foundation. Oozing with glitz and glam and a whole lot of good will as guests raised over $6.3 million dollars for Elton’s foundation, the night wasn’t without its surprises, including a surprise duet between Elton and Welsh heartthrob Taron Egerton, who will be playing John in the highly anticipated biopic about his meteoric rise to fame, Rocketman.

Egerton, 29, was welcomed to the stage during the auction portion of the evening’s events right as a trip to London to see the premiere of Rocketman was up for grabs. Auctioneer Alexander Gilkes invited Taron to sing, and the actor graciously accepted the offer, but with one condition: only if Elton accompanied him.

Elton warmly accepted the invitation to join Taron onstage, jumping behind the piano and launching into a tender rendition of “Tiny Dancer” that allowed Egerton to showcase his voice ahead of his debut as Elton John when Rocketman arrives on May 31st.

While this wasn’t the first time fans got to experience Egerton’s voice, it is the first time that the actor, who does his own singing in Rocketman and previously tackled “I’m Still Standing” for the hit animated film Sing!, is heard singing the entirety of “Tiny Dancer” in comparison to the brief snippet offered up in last week’s new Rocketman featurette.

If last night’s duet at Elton’s Oscar night bash isn’t proof that dreams really do come true, I don’t know what is! Relive the magic in the video below and while you’re at it, don’t forget to sound off and let us know how you liked it!