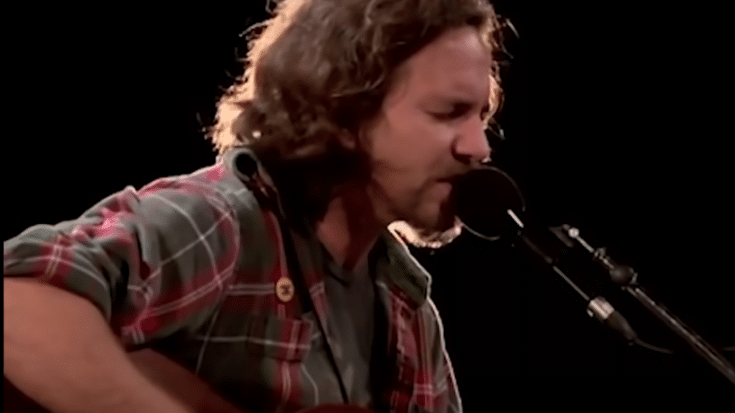 Pearl Jam’s Eddie Vedder has unveiled the track listing for his upcoming solo album, Earthling, which will be released on February 11.

It features music icons Elton John, Ringo Starr and Stevie Wonder. But the most interesting part about the upcoming album is the appearance of Eddie’s late father’s vocals.

Vedder grew up believing that his stepfather was his biological father until years later when he learned the truth. He dropped out of high school and joined the rest of his family in Chicago.

In 1984, he returned to San Diego and started making music projects with local bands such as Temple Of The Dog, then Vedder began his career in Pearl Jam in 1990.

In an interview with Mojo magazine, Vedder revealed that he carried his late father’s vocals in his suitcase for three months because he wasn’t ready to hear them saying:

“I didn’t really get to know my real father. I met him maybe three or four times as a kid, but he was a friend of the family. But the crazy thing that did happen was that about 10 years ago, the Chicago Cubs, some of their old-timers get together and play baseball for about a week. And I would go down there every other year and hang. … One of the ex-players, this erudite, badass trumpeter — he used to play third base — his name is Carmen Fanzone.

I saw Carmen playing the horn in a little club in Arizona, and this guy playing keyboards with him had been best friends with my dad. He later brought me some photos of them in little basement studios. Then a couple of years after that, he brought me five songs of my dad singing on a disc. I carried that disc around for two, three months in my suitcase, not ready to hear it. Finally, I got the guts, and after a couple of bottles of wine, I played it one night in Argentina.”