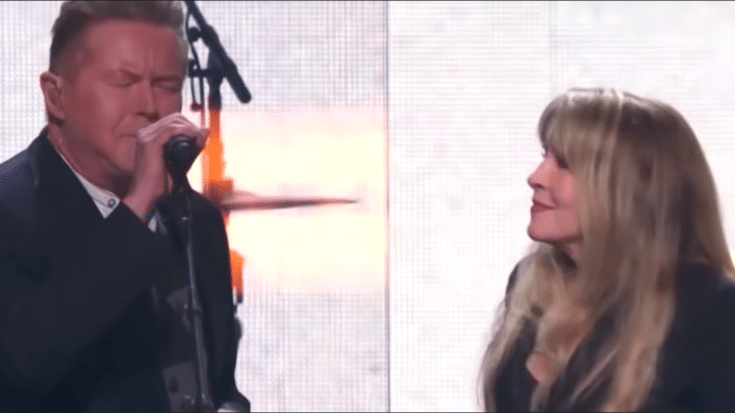 Reunited And It Feels So, So Good!

Featured on Stevie Nicks’ 1981 album Bella Donna, the duet ‘Leather and Lace’ featured her then boyfriend Don Henley of the Eagles. Despite the ensuing breakup, Stevie and Don remained great friends and over the years have made their way back to each other for one off performances here and there and the way they connect with each other makes “Leather and Lace” about as perfect as a song gets – or so we thought!

At Friday night’s Rock and Roll Hall of Fame induction ceremony, this Henley/Nicks classic became something larger than life when Don Henley as he surprised the crowd by walking onstage to join friend and ex-lover Stevie for the song’s second verse. Hands down, the chemistry that these two legends have as they share the stage singing what Stevie considers “the best love song she’s ever written” is unbelievable, and makes us wish even harder that they’d record together again.

Fun Fact: Stevie Nicks wrote ‘Leather and Lace’ for Waylon Jennings and his wife Jessi Colter to sing as a duet. When Jennings and Colter divorced, Stevie kept it and featured it on Bella Donna.

At around 2:49, you hear the crowd go absolutely wild as Don sneaks out from backstage and takes his spot beside Stevie, and from the moment he begins his verse it’s all over – chills abound as he and rock and roll’s fairy godmother bring an element of magic to “Leather and Lace” that we never knew how much we missed. If you missed this magical moment the first time around, never fear – you can check out their take on the classic in the video below!