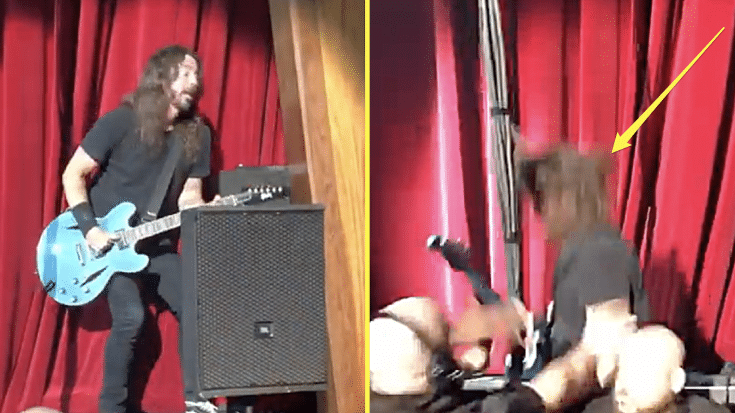 To start this, let me first take you all the way back to June 12, 2015 in Gothenburg, Sweden. The Foo Fighters were in the middle of a rip-roaring set when suddenly frontman Dave Grohl trips and falls off stage breaking his leg.

He was quickly brought backstage where he painfully had his leg put back in place. He returned to the stage and finished the show with a medic holding his leg in place for two hours.

Thank you Gothenburg. That was amazing.

Now, fast forward to 2019, Grohl is back at it again with his stage falling shenanigans. Fortunately this time around didn’t prove to be as damaging; at least not to any of his bones.

This all took place just a few days ago at The Joint at the Hard Rock Hotel in Las Vegas as part of CES 2019. The Foo Fighters were once again in the middle of a set when Grohl decided to cruise to the side of the stage playing a guitar solo. Once he reaches the end of the stage he is handed a beer, which he chugs in seconds. Once he finishes it he makes an attempt to rejoin the band when the unthinkable happens. Watch below and see for yourself.

I’ll tell you what, if this happens a third time Grohl is gonna need a walker or a seeing eye dog or something. Luckily he wasn’t injured this time around, but he certainly could’ve been. But hey, it happens to the best of us.

Like I said, Grohl wasn’t injured this time around, thank God, but we’re DEFINITELY gonna have to put some bubble wrap on that guy, because at this rate, he’s prone to break a bone at some point!