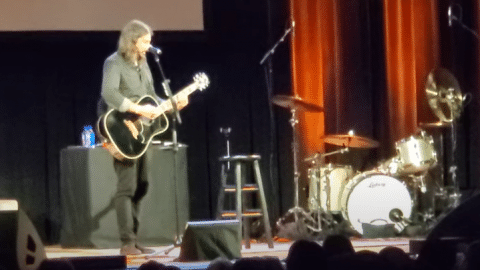 Foo Fighters frontman Dave Grohl has been busy promoting his memoir titled “Dave Grohl: The Storyteller – Tales In Life & Music”, which hit the shelves on October 5. He appeared at New York City’s Town Hall, and he treated the attendees to a mini concert.

Grohl paid tribute to his former band Nirvana by performing “Smells Like Teen Spirit”, and he also played a solo acoustic version of Foo Fighters classic hits “My Hero” and “Everlong.” You can watch the videos below.

The Storyteller has been described as “a collection of memories of a life lived loud”.

“I’ve never really been one to collect stuff, but I do collect moments,” Grohl explained when he first announced the book. “My life flashes before my eyes every single day and in writing this book I’ve tried to capture those moments as best I can.”

“When the lockdown happened, I suddenly had nothing to do. I never have nothing to do,” he continued. “I’ve always been creatively restless. So I spent my time writing these short stories for an Instagram page, @davestruestories. And in doing that, I fell in love with writing. I thought, ‘You know what, maybe I’ll just write a book’, without realising how gargantuan of a project it would be.”