She’s Only 7, But Smashes “Sweet Child ‘O Mine” Like a Pro On Guitar 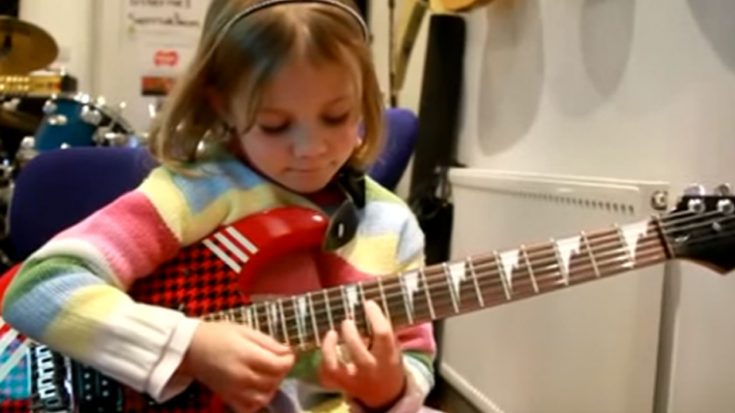 Move over, Slash. Zoe’s about to take the world by storm! This 7-year old (now 10) already knows how to rip the guitar. Yes, sir. At her age, I was probably still playing in the mud. But this adorable kid has the rock world buzzing because of her musical chops. She’s so good even Slash was left speechless after he saw her video! So even the legendary Guns ‘n Roses guitarist joined Zoe’s fan club. She is THAT good.

She’s also the lead guitarist for her group, Mini Band. She’s actually a bit of a big deal in UK and she’s gaining more popularity all over the world – anyone who knows what real talent sounds like will easily become her fan. Back in 2012, she signed up with a guitar company.

“Zoe is really excited; she is overjoyed. For someone of her age to get an endorsement is a massive achievement. I think you have to have something special to be endorsed, and it’s really nice that someone has recognised her talent.” – Mother Collette Thomson

She may be tiny but her guitar skills are massive. She’s been compared to several other legendary axeslingers like Slash and Eddie Van Halen. And we’re pretty sure she can hold her own against these rock titans. She’s even being dubbed as the “Future of Metal” and we’d have to agree! At a time when MTV and radio stations are dominated by crappy music, Zoe is a breath of fresh air. She restores our faith in the new generation and makes us hopeful that rock ‘n roll will live on.

Zoe started playing the guitar when she was still five and her passion has paid off. She makes it look effortless. It’s so cute and cool. Everyone has to start somewhere and I can’t wait to see Zoe’s progress in 10 years. She’d be unbeatable by then. Keep on rockin’, little axe slinger!