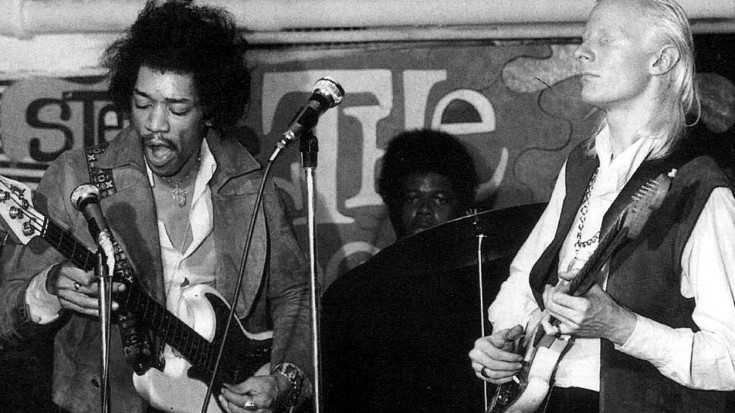 Texas blues guitar icon Johnny Winter goes down in history as one of the most vicious slide guitarists in history – he even used the same piece of pipe as a slide for his entire career! However, even he had to tip his hat to the greatness that was Jimi Hendrix; Johnny admired Jimi so much that on one occasion, he even tore through his own blues-soaked rendition of ‘Hey Joe’ – and lucky for us, someone caught it on tape! You can’t talk about guitarists in the last 50 years without acknowledging Johnny Winter, and it’s performances like this that explain why.

Winter was a prolific guitarist in his own right, widely regarded as one of the best slide guitarists in the world, surpassing even Duane Allman in terms of his musical ability. Leave it to Johnny to tackle one of Jimi Hendrix’s most iconic songs and not just nail the solos, but completely dominate as far as anyone’s concerned!

Fun Fact: Johnny Winter inspired none other than the late Stevie Ray Vaughan, who would follow his footsteps and become known as one of the greatest Texas blues guitarists to ever pick up a guitar.

We adore Jimi and the original ‘Hey Joe,’ but there’s just something special about Johnny’s version: maybe it’s the way he fused together psychedelia and blues, the perfect blend pf Jimi’s Seattle roots to his own Texan roots. Or, maybe it’s the fact that Johnny’s playing was just plain lyrical, telling the story without needing to overcomplicate it with words. Either way, Johnny was a force of nature when he had a guitar in his hands, and is far and away one of the only musicians capable of doing justice to what Jimi Hendrix created!