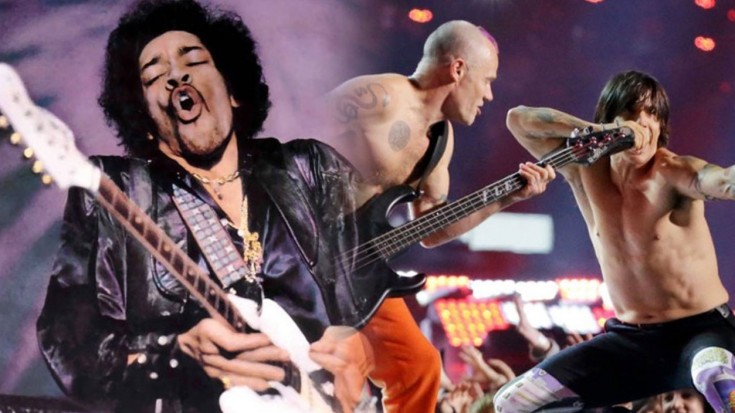 Recorded by the Jimi Hendrix Experience for their 1967 second album, Axis: Bold as Love, Castles Made of Sand was produced by Jimi’s manager Chas Chandler.

The song is said to be a biographical story about Hendrix’s childhood. Hendrix’ mother was a Cherokee Indian, and in this song he identifies with his heritage as a Native American which was a big deal for such a private person to do. Jimi hated to talk about this past and avoided it at all costs during interviews and conferences. It was shocking to see him write something so personal.

The Red Hot Chili Peppers did a live recording of the song, which is included as a B-side to their 1989 single “Taste the Pain“, and later on their 1994 compilation, Out in L.A..

Tom Maginnis of AllMusic calls it a “largely faithful tribute where guitarist John Frusciante displays a considerable Hendrix influence”.[6] The band also recorded another version, which is included as a bonus track on Blood Sugar Sex Magik.

I’ve always been a huge fan of RHCP, and love this cover! What do you think… would Jimi be proud? I think so!

+Castles Made Of Sand lyrics below+

Down the street you can hear her scream “you’re a disgrace”
As she slams the door in his drunken face,
And now he stands outside and all the neighbors start to gossip and drool.

He cries “Oh girl, you must be mad,
What happened to the sweet love you and me had?”
Against the door he leans and starts a scene,
And his tears fall and burn the garden green.

And so castles made of sand, fall in the sea, eventually.

A little Indian brave who before he was ten, played war games in
the woods with his Indian friends, and he built a dream that when he
grew up, he would be a fearless warrior Indian Chief.

Many moons passed and more the dream grew strong, until tomorrow
He would sing his first war song,
And fight his first battle, but something went wrong,
surprise attack killed him in his sleep that night

And so castles made of sand, melts into the sea eventually.

There was a young girl, whose heart was a frown,
Because she was crippled for life, and couldn’t speak a sound
And she wished and prayed she would stop living, so she decided to die.
She drew her wheel chair to the edge of the shore, and to her legs she smiled

“You won’t hurt me no more.”
But then a sight she’d never seen made her jump and say
“Look, a golden winged ship is passing my way”
And it really didn’t have to stop…it just kept on going.
And so castles made of sand slips into the sea,
Eventually