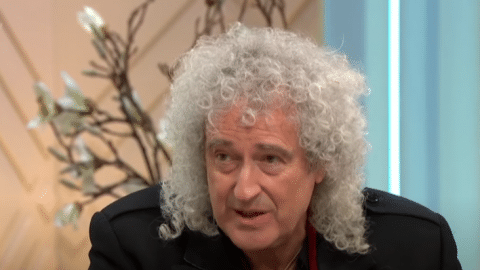 Queen guitarist Brian May has revealed that he recently underwent an eye surgery on his left eye. The 73-year old rocker took to social media to share before and after photos of himself while in the hospital. In the first post, he’s still prepping for the procedure and he’s wearing a hospital gown and face mask. There’s also an arrow drawn above his right eye. He assured everyone that he’s “in good hands” and that there’s “no need to worry”.

He explained that the purpose of the operation was to improve his focus and vision. He followed it up with another selfie and this time, the arrow is pointing to his left eye. He wrote, “A straight selfie (unless hooked up directly to a live IG or similar) doesn’t laterally invert your face – but a mirror does!”

Lastly, he posted a photo after the surgery where he has a bandage over his left eye. He captioned it with, “I really didn’t feel a thing. It was all done with local anaesthetic and a tiny bit of sedation – So I was conscious throughout the whole thing – and fascinated by this amazing procedure.”

It was done in just twenty minutes and the patch had to stay on until the following morning. He even jokingly called it an iPatch.