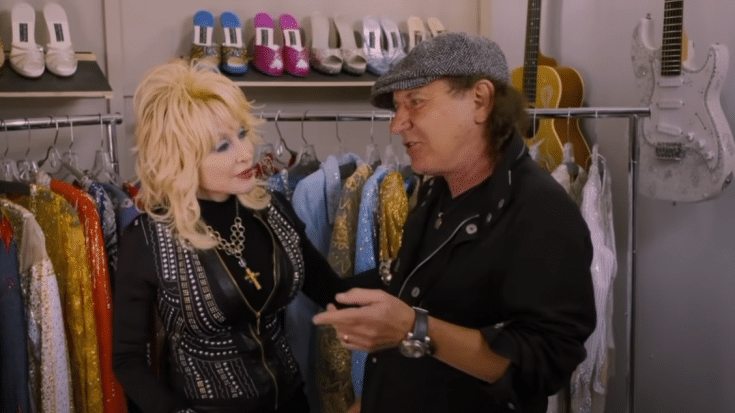 In the opening episode of Brian Johnson’s A Life On The Road Season Two, he surprises country legend Dolly Parton in her dressing room in Nashville. It’s such a chill interview that we can’t help but fall in love with their friendship. Dolly shows off her colorful and glittering dresses and she even calls them “highway to heaven” in reference of course to the AC/DC classic hit Highway to Hell.

They chat a bit about her outfits, shoes, and music. She tells him how she comes up with the lyrics and melodies. She also points out that she’s similar to Brian in that she draws “from life like you do”.

Elsewhere in the interview, she shares about her song I Will Always Love You.

It was a commercial success at the time of its release and a few years later, she re-recorded it for a soundtrack which again topped the charts. Elvis Presley wanted to cover the track but when Dolly found out that she needed to sign over half of her publishing rights, she famously said NO. She recalled that she “cried all night” and thought it “was like the worst thing.” And she added, “Then when Whitney [Houston’s version] came out, I made enough money to buy Graceland.”