Brace Yourselves For Robert Downey, Jr. And Sting’s Swoonworthy “Every Breath You Take” Duet 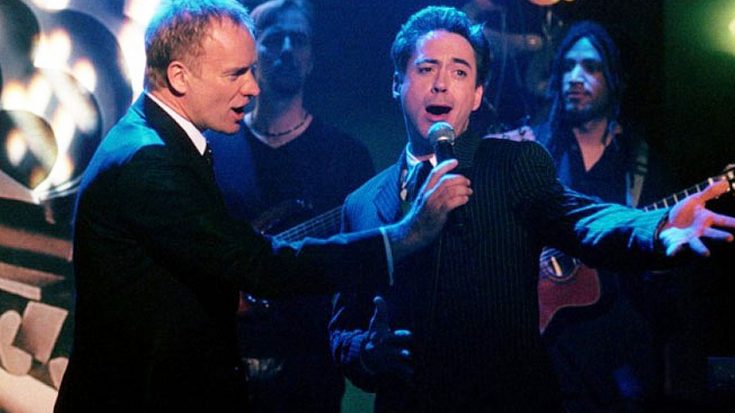 In 2011, Robert Downey, Jr. and Sting wowed with their performance of The Police’s 1980 hit “Driven To Tears” in celebration of Sting’s 60th birthday, but that wasn’t the first time these two shared a mic – and we hope it’s not the last!

A decade before they rocked New York City’s Beacon Theatre, Robert and Sting converged on the hit television show Ally McBeal for a special story arc revolving around main character Ally (played by Calista Flockhart); lamenting the thought of spending another birthday alone as her boyfriend Larry Paul (played by Downey) is stuck in court battling on Sting’s behalf, Ally is ultimately given the shock of a lifetime at her birthday party that evening when Larry shows up with Sting, surprising her with a swoonworthy duet of The Police’s “Every Breath You Take”.

Fun Fact: Written by Sting, “Every Breath You Take” was the biggest hit of 1983, topping the Billboard Hot 100 singles chart for eight weeks (the band’s only number-one hit on that chart), and the UK Singles Chart for four weeks.

Judging by the reaction of those seated around her, Ally wasn’t the only one absolutely gobsmacked by the duet – this was three years before Robert’s album The Futurist debuted and the first time we’d gotten to see this side of the actor and in true Downey fashion, he did not disappoint (Sting was great, too!). Check it out in the video below!