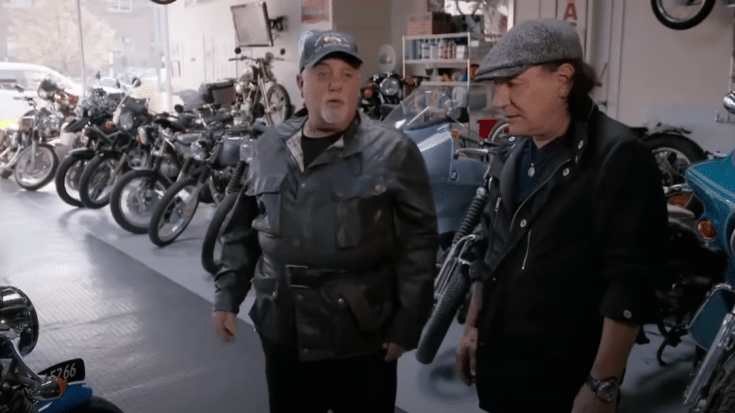 Brian Johnson’s A Life on the Road featured several of his friends in the rock ‘n roll industry. In one episode, his guest is none other than Billy Joel. They hung out at Joel’s 20th Century Cycles shop located in Oyster Bay.

According to Joel, what they do is “take new bikes” and then they “make them look like old classic bikes”. Brian, who’s a well-known car collector, revealed that his first bike would break down every fifteen minutes. Watch below as Joel explained some of the “custom stuff”.

Johnson and Joel have been friends for years and they’ve teamed up on stage for a few performances in the past. Like in 2014 when they performed AC/DC’s classic hit You Shook Me All Night Long. Johnson recalls that night when he went to Joel’s dressing room and said, “I was going, ‘Well, where is he?'”

He continued, “And then there was a curtain to the shower, and Billy was sitting behind it, sitting on a seat, having a [cigarette]. And he went, ‘Over here!'” Joel then shared that since that particular night at Madison Square Garden, the crew called Johnson’s dressing room as the “Brian Johnson room” which Johnson said is “a great honor.”