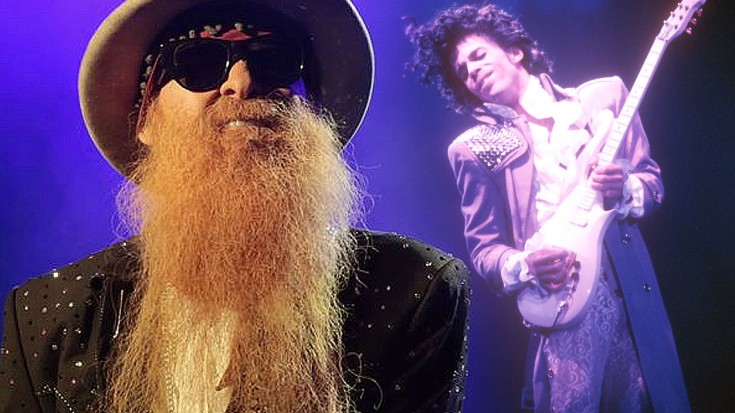 As tributes to late legend Prince continue to roll in, we’re hearing more and more from people that not only knew him as a highly gifted musician, but as a friend. Dave Chappelle, Stevie Nicks, Mick Jagger – each of them has a story about their friendships with Prince, but the one that touched us the most came from ZZ Top’s Billy Gibbons. Gibbons, who mourned the loss of his ‘guitar playing pal’ via Twitter, discussed Prince’s genius as a guitar player and revealed the moment that left him ‘mesmerized’.

During a chance meeting at New York’s Tiger Bar in 2009, Billy sat down with Prince and talked guitars for hours – Prince asking for the secret to songs like “Gimme All Your Lovin’,” Billy sharing amplifier settings and asking about “When Doves Cry” – but what struck Billy the most was Prince’s dedication to his craft.

“We really dove into the depth of his intent, interest and focus toward technique and tone.

I left that evening even more mesmerized than I’d previously been, just knowing the sincerity that Prince kept toward his playing, his performing and his all-around showmanship.”

High praise from one of the most celebrated guitarists in rock! We knew Prince was a genius, and quite frankly, so did Prince; but to hear such high praise not just about his abilities as a guitarist but about how he was always willing to learn, teach, and share with musicians he admired to create something honest, sincere, and beautiful is really something.