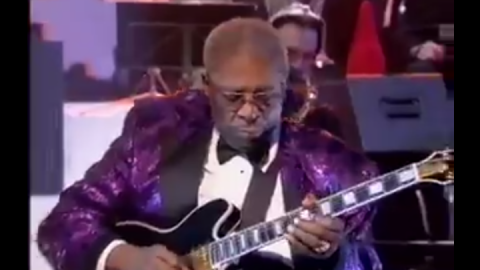 Composed by Jools Holland and Riley King, this track was included in B.B. King’s album entitled, “Deuces Wild” released on November 4, 1997. It’s B.B. King’s thirty fifth studio album and he features plenty of famous musicians for each song. He has amazing fills and beautiful solo performances. It’s an absolute delight to listen to each song as B.B. King shows his versatility by jamming to different genres. This album was also nominated as “Best Contemporary Blues Album” during the 1999 Grammy Awards.

“The crowds treat me like my last name. When I go onstage people usually stand up, I never ask them to, but they do. They stand up and they don’t know how much I appreciate it.” – B.B. King

In this particular video of their live performance, B.B. King and Dave Gilmour perform “Pauly’s Birthday Boogie” while being backed by Dave Swift on bass with Jools Holland. This was during the Jools Holland’s Annual Hootenanny. This is live music at its absolute best!

Imagine sitting in the crowd and listening to the soulful music pulsating in the air. B.B. King rips it as his backup musicians play with the same passion and energy.