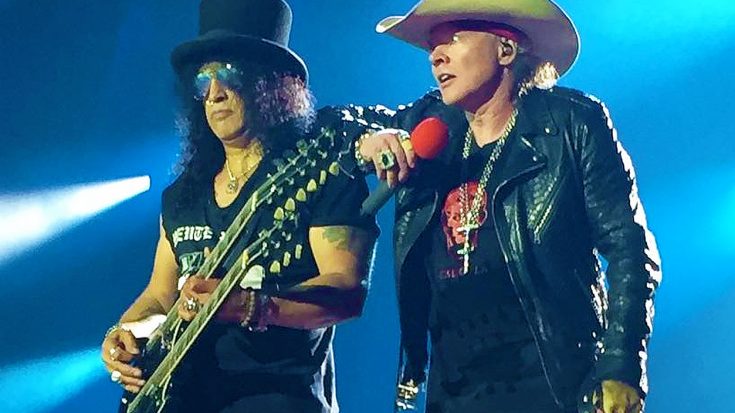 “My Manager Thought It Was A Joke,” Reveals Axl

For many fans, it wasn’t the fact that Guns N’ Roses were bringing back together 3/5 of the classic lineup – plenty of bands manage to work together and still hate each others’ guts, after all – it was the fact that Axl Rose and Slash managed to bury the hatchet and restore their friendship after a decades long feud between the two. If you were wondering how two legends like that go from the point of no return to sharing a stage again, Axl Rose was kind enough to share some of the details of his reconciliation with Slash – including the moment that his manager Fernando Lebeis actually asked, “Is this a joke? Because if it’s a joke, I’m going to kill you.”

It literally started the way most great partnerships start:

“I texted Fernando and asked for Slash’s number,” confessed Axl.

Thinking it was a joke, Fernando texted back with “Is this a joke? Because if it’s a joke, I’m going to kill you” before passing on Slash’s number to Axl, who caught the guitarist while he was on tour.

The pair set up a meeting that ultimately fell through due to scheduling conflicts, but in October 2015 the stars aligned and, for the first time in over 20 years, Axl and Slash were face to face at a dinner held at Axl’s home in California.

We’ll never know what exactly was said at that first dinner between Axl and Slash and what their reconciliation entailed, but judging by Axl’s claim this summer that Duff and Slash would “be around Guns N’ Roses for a good long time,” that first conversation had to be both fiercely honest and fiercely entertaining. Cheers to Axl for being man enough to take the first step, and cheers to Guns N’ Roses on the greatest year of their entire career!