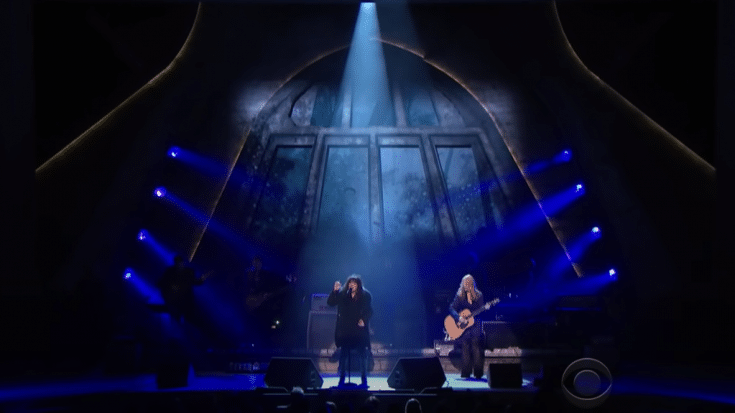 Both Ann and Nancy Wilson Were Nervous Before The Performance

It’s so beautifully done that Led Zeppelin singer Robert Plant was moved to tears just a few seconds into the song. And in a new interview with Vulture, Ann Wilson looked back at that moment.

She recalled, “I haven’t seen it that many times. [Laughs.] But I’ve seen it a lot because it pops up on social media very often and I get sucked into watching it again and again. It’s surreal to me because my experience of those moments was from a whole different perspective. It was like I was up onstage and I was not even … I was taking care to not pay attention to anything but the exact moment. I wasn’t going, Wow, the Obamas are out there! The guys from Led Zeppelin are out there! I wasn’t doing that, because I wanted to keep my soul focused. It was a moment of high visibility in my life. I continue to watch it in awe, because I wasn’t aware of the effect it was having at the time.”

She cited Plant as a major musical influence because he showed “that you could step outside the cultural norms of what a chick can sing and what a dude can sing. He never paid attention to that… I really give him all of the credit for helping me break through and being able to have that confidence.”

Interestingly though, the sisters accepted the offer to perform at the Kennedy Center Honors without knowing what they’ll be asked to sing. It wasn’t until a few days before the event when they were told it’s “Stairway to Heaven.” Ann mused, “That song is almost holy. You don’t want to do anything wrong; you want to do everything super right. I knew “Stairway to Heaven” would be the perfect hymn to fill that venue with, because it’s a very elite, beautiful, and classical venue.”

Though she and Nancy were already veteran rockers, they still got nervous prior to the performance. Remembering how she felt on stage, Ann admitted: “I actually felt every second of it as a real, not to overstate it, but pretty damn close to orgasmic in terms of bliss. I felt wide awake and alive, and I felt the emotional content of the song all the way down to the ground. It was really authentic. The emotions involved in performing that were wide awake and in the moment.”

Watch their epic rendition below.

Sammy Hagar Recalls The Moment He Learned That Eddie Van…

The Story Of How Beethoven Inspired ‘Because’…