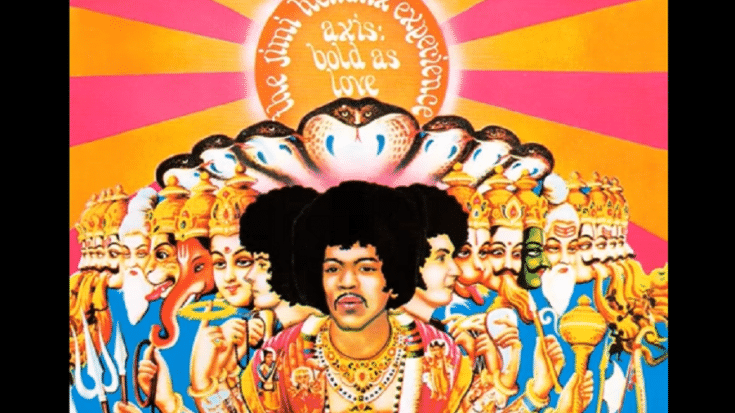 The Jimi Hendrix Experience only has three albums in their discography. And that’s perhaps the reason why the follow-up to their debut is not as revered as its predecessor. Axis: Bold as Love is sandwiched between the stunning Are You Experienced and the monstrous Electric Ladyland. This may pale in comparison to the other two but that doesn’t mean it’s not as brilliant. On the contrary, it’s another groundbreaking effort from Jimi Hendrix, Noel Redding, and Mitch Mitchell.

As expected, Hendrix shows off his immaculate guitar playing but he also makes use of studio equipment to add sounds that nobody has heard of in a recording at the time. Not every song leaves an impression but none of them are downright awful too.

For his first record, Hendrix already claimed a spot as a guitar deity so in Axis, it’s as if he was content with tracks that are a little more laid-back and mellow than Are You Experienced. He went back to his R&B roots and the songs proved his versatility as an axeslinger.

EXP is an experimental and avant-garde song that somehow seems a bit confusing at first but understandable because it’s about UFOs. Up From The Skies has that surreal feel partly because of Hendrix’s use of the wah wah pedal. Spanish Castle Magic is a heavy and edgy rocker while Wait Until Tomorrow is groovy. Ain’t No Telling is one of the less appealing tracks but still great in its own way. Little Wing needs no introduction. It’s a whimsical ballad that’s hands-down beautiful. It’s not something you listen to just once. If 6 was 9 is the most psychedelic piece on Axis and clocking in at over five minutes, it’s the longest song on the album.

You’ve Got Me Floating is a straightforward rocker that opens side two. Castles Made of Sand is wistful and melancholic – it’s one of Hendrix’s most personal songs. She’s So Fine features features bassist Noel Redding stepping up for the singing duties. One Rainy Wish is another beautiful ballad that’s unfairly overlooked while Little Miss Lover is a fist-pumping track. Axis closes with the title track Bold as Love has a rawness that made it stand out.

Overall, even with his wilder and hard rockin’ numbers, Hendrix pulled it off with finesse. It’s wild but wonderful. Packs a lot of punch but not overwhelming. It gives you a sense that in just a matter of months, Hendrix has matured as a songwriter and musician. His perfectionism is still there, not unexpectedly, and this one’s more focused. It has an understated beauty and elegance.