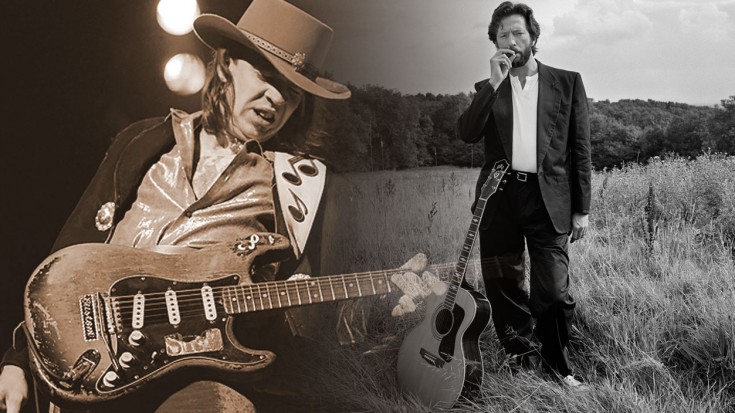 “This guy figured it out before he ever walked out of his house, and what that thing was was half brutal force and half finesse. It’s bend as hard and as fast as you can bend, but hit the note like a paper airplane landing perfectly on the street.” Thanks to John Mayer, I think SRV may have been summed up in a sentence, which is nearly impossible.

Check out some of my favorite quote by fellow musicians, and singer-songwriters about the infamous, and insanely talented Stevie Ray Vaughan.

Gregg Allman I remember when he first came out, he was doing that Hendrix song [Voodoo Child], and I heard all these people going, “Ah, he’s just trying to do Hendrix. But he went a lot further than that. He was absolutely 100-proof, pure blues. Albert Collins, Muddy Waters – the essence of that was in everything he played. More than the Allman Brothers, he was straight-down-the-line blues.

Stevie was always playing. After he’d get offstage, he’d get on his bus. And he had all these Stratocasters hanging there. He’d grab one and start goin’.

David Bowie I saw Stevie in two completely opposite places. In 1983 he was sitting cross-legged on my floor during rehearsals for a not to be undertaken tour. His furrowed brow and sallow cheeks seemed old and weary on a face that young. Our talk drifted from blues to travel to books. All at once, his engine revved up to full throttle and he waxed at length about the things he read, fixing pointedly on a tome concerning the ups and downs of a young boy. He told me how inspirational this book was and how one day the lessons in it would enable him to stand taller than he already was. As the conversation ended, his expression fell back into the unknownable depths that only the truly hurt can fathom.

The second time was at a Double Trouble gig in 1990. With bright, shiny eyes, a huge warm grin and hug, he brought me back into his dressing room. Sure enough, times had changed and he related to me with passion how bad things had gotten and how good they were now. Happiness, hope, and fulfillment filled his face. Right there I knew he had become as tall as the thoughts in the book of which he had spoken those many years before. Stevie had one thing going that eludes so many. He had grown into the man he knew he always was.

Mick Jagger He was the greatest blues guitarist of his generation.