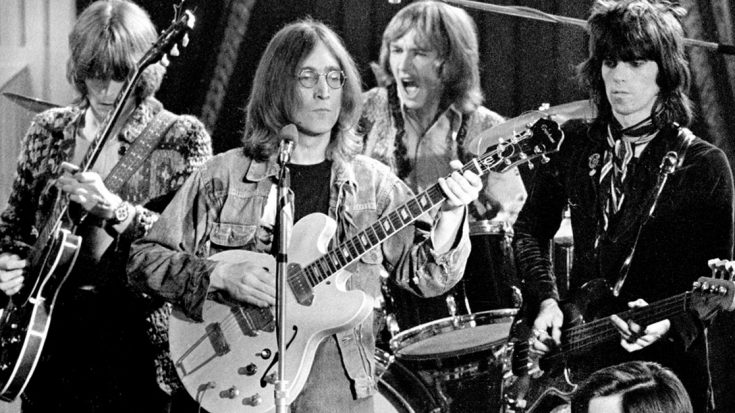 If you have a distant memory of once seeing John Lennon perform with Eric Clapton, Keith Richards, and Mitch Mitchell of the Jimi Hendrix Experience, don’t worry, you’re not going crazy or having a stroke – that actually happened. Known as The Dirty Mac, this seemingly unlikely supergroup made their television debut on December 11, 1968 in honor of the Rolling Stones’ TV special, The Rolling Stones Rock and Roll Circus; Lennon, in his first ever performance away from The Beatles, enlisted the help of Clapton, Richards, and Mitchell for the project, bringing The Beatles’ “Yer Blues” to center stage and as an added bonus, John’s wife Yoko is blessedly nowhere to be found for this particular Dirty Mac performance.

Fun Fact: The Dirty Mac was a play on “Fleetwood Mac” who at that time were a very popular band in the United Kingdom.

While it’s strange seeing this particular configuration of rock legends together one stage with John appearing with a band that wasn’t The Beatles, it also gets our brains a-turnin’ as we think about what The Dirty Mac could have become with just a few more years and even more interesting than that, where life would have taken John, Eric, Mitch, and Keith. We’ll never know, but this video gives us a pretty fantastic idea. Check it out below!