31 Years Ago: A Mistake Brings Sammy Hagar And Eddie Van Halen Together Onstage For The First Time 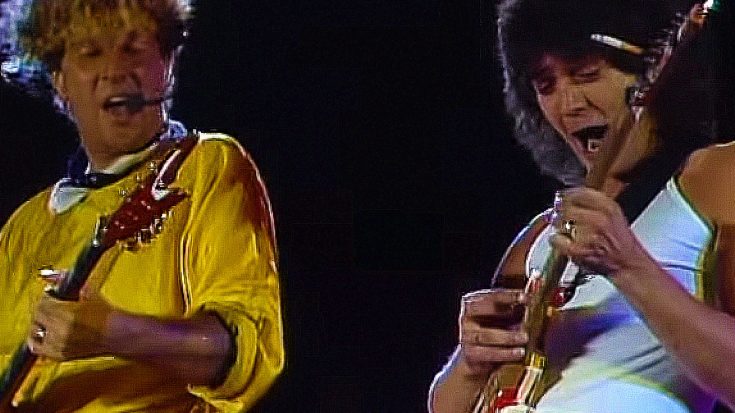 In 1984, Van Halen famously split with singer David Lee Roth, leaving fans wondering when and if they’d ever fill the massive void left by Diamond Dave. The truth is, by 1985 Van Halen had already found a new frontman in the form of former Montrose singer Sammy Hagar and were planning to announce their new addition when the time was right.

However, a weekend spent hanging out at Eddie Van Halen’s home in late 1985 ruined that plan in a pretty awesome way; while perusing a newspaper together, Sammy and Eddie discovered that the inaugural Farm Aid benefit concert had mistakenly announced a joint performance between Sammy, who was slated to play the festival, and Eddie Van Halen.

“We didn’t have time to work nothin’ up,” Hagar told the crowd. “And Eddie and I were sittin’ at his house, and we looked in the newspaper, and it said Eddie was gonna jam with me.

And I said, ‘Well, I didn’t know that.’ So at the last minute, we decided to go ahead and do it. We don’t know any songs as a band, so we’re just gonna jam a couple songs that we all grew up on.”

Instead of getting angry or letting themselves feel rushed, Sammy and Eddie turned this mistake into the perfect opportunity to announce Sammy as the official new lead singer of Van Halen and on September 22, 1985, Eddie surprised the audience at Farm Aid by joining his friend Sammy onstage where the two tore into Led Zeppelin’s “Rock And Roll” before making the big announcement. Check out the electrifying moment between these two legends in the footage below!