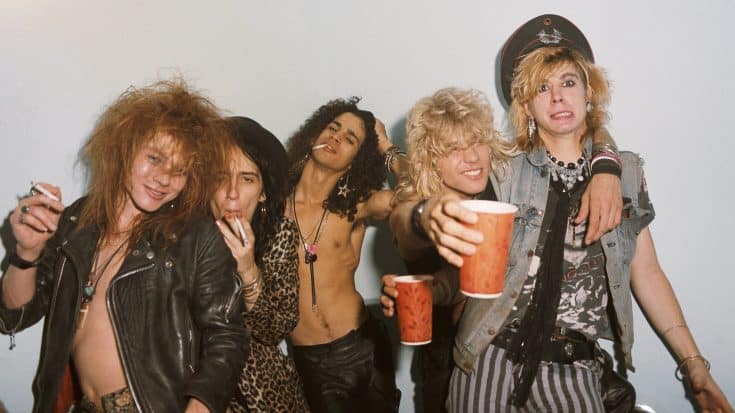 Say what you want about Guns N’ Roses, but they had one of the most stunning debuts in rock ‘n roll. While most rock bands were still finding their sound and style, GNR hit the ground running. Over three decades after “Appetite for Destruction” was released, the songs have aged fairly well.

Here are interesting facts about the LP:

1. It had a different cover art at first.

Instead of the now-iconic logo of cross and skulls, they initially used an artwork based on Robert Williams’ painting Appetite for Destruction. However, it was too grotesque and music retailers refused to sell their album. The label was left with no choice but to use another artwork designed by Billy White Jr.

“The cross and skulls that looked like the band was Axl’s idea, the rest was me,” White explained. “The knot work in the cross was a reference to Thin Lizzy, a band Axl and I both loved.”

2. Some songs from the “Use Your Illusion” albums were written before they released “Appetite for Destruction”.

“November Rain”, which appeared on “Use Your Illusion I”, was written before GNR began with their sessions for “Appetite for Destruction”.

Although it’s a stunning record, that didn’t immediately translate to huge sales. At the time of its release, Aerosmith, U2, and Def Leppard dominated the airwaves and MTV while GNR were largely ignored. Several months later, “Welcome to the Jungle” was put on heavy rotation in MTV. Add in their constant touring and radio airplay, it topped the US Billboard 200 a year after its release.

4. The music video for “Welcome to the Jungle” helped them break into mainstream.

As mentioned earlier, the LP stalled. It only got noticed after “Welcome to the Jungle” was played on MTV, something that David Geffen personally requested. It was then when radio stations started to pick it up.

5. “Paradise City” was written after a gig in San Francisco.

They were in the back of a rental van when Slash came up with the intro, and Duff McKagan and Izzy Stradlin then played along. Axl Rose told Hit Parader Magazine in 1988 that “the verses are more about being in the jungle; the chorus is like being back in the Midwest or somewhere.”

She dated Steven Adler for a year. She got angry with him and decided to get her revenge by sleeping with Axl Rose in the recording studio. And the sounds she made were included in the song.

“Axl wanted some pornographic sounds on Rocket Queen, so he brought a girl in and they had sex in the studio,” engineer Steve Thompson explained. “We wound up recording about 30 minutes of sex noises. If you listen to the break on Rocket Queen it’s in there.”

Slash found himself in the company of other guitar greats thanks to his face-melting solo in this song. But it got tiring real quick for him.

“[The song] turned into a huge hit and now it makes me sick,” he said. “I mean, I like it, but I hate what it represents.”

9. “Out Ta Get Me” was about Axl Rose’s troubled past.

He’s always been a troublemaker, and so this song was inspired by his constant brush with the law as a youth.

10. They considered KISS’ Paul Stanley as the album’s producer.

They decided he wasn’t a good fit though when he wanted things done differently.

11. “Nightrain” was a tribute to a cheap Californian fortified wine, Night Train Express.

The band loved it because it was cheap, but it had high alcohol content. Slash even described it as “an anthem that we came up with on the spot”.

12. On vinyl records and audio cassettes, they labeled the sides as “G” and “R”.

Normally labeled “A” and “B”, side “G” was mostly about drugs and hard living while “R” was about love, sex and relationships.

It featured Rose’s first wife, Erin Everly, and when Rose saw Bowie making a move on her, he lost it. Rose ever hurled insults directed at Bowie.

14. It became the best-selling debut album of all time.

It sold more than 30 million copies worldwide, and it was certified 18× Platinum by the RIAA.

15. “Anything Goes” was originally for Hollywood Rose.