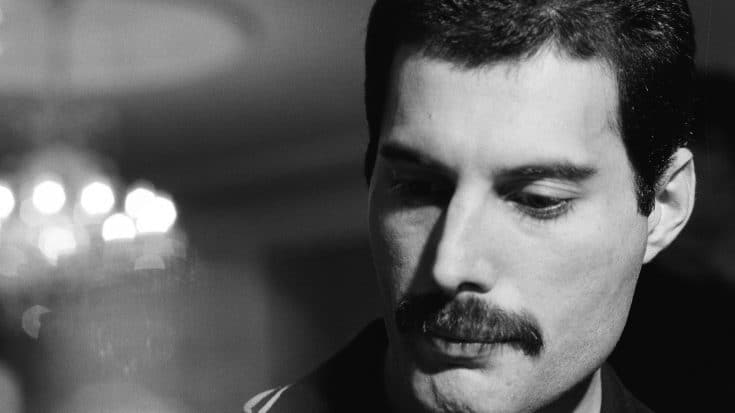 Freddie Mercury of Queen, interview and photo session for 'Music Life' magazine, on the band's Hot Space Japan tour at a hotel in Fukuoka, Japan, 19 October 1982. It was the band's fifth visit to Japan. (Photo by Midori Tsukagoshi/ShinkoMusic/Getty Images)

Legend has it that Freddie Mercury is so great he can stand and do nothing and the stage will rock itself. By now, you probably know he was honored on his 70th birthday by naming an asteroid after him. But here are some things which might surprise you:

Freddie designed the famous Queen crest himself prior to the release of their first album. The thing is, he graduated from the Ealing Art College (where Ron Wood and Pete Townshend also got their degrees) and received his diploma in graphic and art design. It features the members’ zodiac signs: the two fairies represented Virgo which was Mercury’s, the crab was for Cancer (Brian May), and the two Lions were for Leo (John Deacon and Roger Taylor). You can see that there’s a stylized Q representing the band’s name, obviously. The lions are holding on to each side of the letter and you can spot the fairies underneath them. The crab is located atop with flames above it. A phoenix then overshadows and seemingly ‘protects’ the entire logo. You may notice that the colors are more elaborate in later album covers. So you see, Freddie’s talent isn’t confined to music, he’s also into visual arts.

9. Notice His Careful Movements Because Of A Recent Injury

The music video for “It’s A Hard Life” (Queen’s third single from ‘The Works’ album) was directed by Tim Pope. The whole concept featured an operatic style and the band had to wear costumes which were not the least bit comfortable. When the video was shown to them, Roger Taylor said that it was “the most stupid music video ever made.” and further added that he “actually loved the song, but hated the video.” If you noticed towards the final scene, Mercury sits down on the steps but he does so cautiously which is very visible and evident. He even favors one side over the other. The reason behind this is shortly prior to their filming, he broke his leg as a ‘remembrance’ when he was on a drinking spree at a bar in Munich. Before they shot the video, the plastic cast that covered his leg has just been removed.

Well for the record, he was once pictured wearing a cat vest which to be honest, only HE can pull off. It was even said that at one point, he owned 10 felines! Wait, exactly how much did he love his furry friends? He had portraits of them. And if he’s away on tour, he would call ‘them’ at home. His ex-girlfriend and long-time friend Mary Austin would hold them up to the phone so they can listen to Freddie’s voice. Now that’s really sweet! He adopted the cats from the rescue centers and in his solo album, Mr. Bad Guy, he said that it was dedicated “to my cat Jerry—also Tom, Oscar and Tiffany, and all the cat lovers across the universe—screw everybody else”. At Christmas, the felines received their own gifts too. One of his favorites, Delilah (a large, tri-colored tabby), was featured in Queen’s “Innuendo” album with the upbeat song title named after her.

7. He Left Majority Of His Riches To An Ex-Girlfriend

Often referred to as Freddie’s “love of his life” (who also happens to be the inspiration for “Love Of My Life”), they were never married but she had a long-time relationship with one of the greatest names in classic rock. After they broke up, they remained to be very close friends. Mary Austin was with him every step of the way and was by his side even when he was dying of the complications of AIDS. So it’s no surprise that he left most of his possessions (including his palatial mansion, most of his vast fortune and even his recording royalties) to her when he passed away. And only she knows the location of Freddie’s ashes. When Mary sat down for an interview with OK! Magazine she said, “The more I got to know him, the more I loved him for himself. We knew we could trust each other and we were safe with each other. We knew that we would never hurt each other on purpose.”

Freddie popularized the use of a bottomless microphone stand and it eventually became his trademark. But it was all by accident. One time in the middle of a Queen concert, he grabbed the microphone stand and it was done with so much force, it broke off and dislodged from the base. He was left with only the top half. But as always, the show must go on and he did like it that way. To be fair though, this was more than just setting a trend. Because he’s one of the greatest showmen to walk the earth, the cut-off mic allowed him mobility and freedom. He can do a marathon on stage and have a prop at the same time. I mean, it would be awkward and tiring if he had to drag the entire stand while performing right? Testament’s Chuck Billy, Anthrax’s Joey Belladonna and Robbie Williams also use bottomless mic stands.

5. He Collected Stamps As A Kid

Aside from his fondness for cats, Freddie was also an avid philatelist or stamp collector. He started building his collection when he was somewhere between 9 to 12 years old. It will even be featured at this year’s Stampex which is a UK stamp exhibition to be held in London from September 14-17. Some of his collection includes that from the British Empire and also from his birth country, Zanzibar. There’s also a wide selection from Eastern Europe and other countries. We have his father to thank because it was him who kept Freddie’s childhood stamp album and who served as Freddie’s inspiration in starting his collection. One interesting fact is that there are pages where the stamps are arranged by type, color or size. On others, Freddie looked like he was creating a pattern or forming a letter from the alphabet. So even at a young age, Freddie has always done everything with an artistic flair.

4. A Yellow Rose Is Named After Him

People love naming things after Freddie Mercury. Perhaps it’s because he’s one of the most loved and charismatic frontmen in the history of rock. Or maybe it’s his flamboyant and intriguing personality. Either way, before there was the asteroid, a species of yellow flowers was named after him. It was said that one of his favorites was yellow roses. The variety was discovered by Eric Stainthorpe and Battersby Roses introduced it a few years after Freddie’s death in 1991. The propagation started around 1993 and the first bushes, which were given to his loved ones, became available a year later. Some of the members of the Freddie Mercury Fan Club raised money so they can name this flower in honor of their idol. The blooms feature soft tones of apricot and of course, yellow. It also has deep pink flushes around the edges. Just like Freddie, this rose is so full of character and well, great style!

3. He Was An Introvert

Freddie’s always had a flamboyant, larger than life persona on stage but off-stage, he’s known to be extremely shy. When you look at him, you see a man who’s a force of energy. He was charming, charismatic and full of candor. But he can be reserved at times, almost like he suddenly erected a wall around himself. He was a paradox. In fact, even though he’s an exceptional piano player (case in point, the immortal song ‘Bohemian Rhapsody’), he wasn’t confident enough that he had the chops. He thought he was mediocre at best and therefore played the piano less and less further in his career. It may be hard to imagine but how he is as Queen’s frontman was entirely different from his personal, private side. He once said: “I’m a sort of chameleon. I think it’s a combination of a lot of characters. And I’m a person of extremes…. When I’m on stage, I become very different. There are no half measures. You have to be resilient to be a rock star, you can’t falter once.”

2. He Could Write Songs Anywhere

With someone as creative and talented as Freddie, inspiration can strike anytime and anywhere which was why his assistants brought paper and pen all the time. For one, he wrote ‘Life is Real’ (which was dedicated to John Lennon) while he was traveling from New York and flying over the Atlantic. ‘Crazy Little Thing Called Love’, on the other hand, was written by Freddie while he was lounging in a bubble bath back in Munich at the Bayerischer Hof Hotel. When he was interviewed by the newspaper Melody Maker in 1981, he said: “’Crazy Little Thing Called Love’ took me five or ten minutes. I did that on the guitar, which I can’t play for nuts, and in one way it was quite a good thing because I was restricted, knowing only a few chords. It’s a good discipline because I simply had to write within a small framework. I couldn’t work through too many chords and because of that restriction I wrote a good song, I think.”

In their famous song ‘Bicycle Race’, Freddie sings the line “And I don’t like Star Wars.” Well first of all, it’s just a song. There’s also the lyrics “I want to ride my bicycle” when on the contrary, Freddie doesn’t enjoy biking. According to Brian May, Freddie “created a character in the song” and he added, “Freddie liked Star Wars a lot.” That settles it! In fact, can you remember when Queen was touring to promote their studio album ‘The Game’? During their show in Houston, he was photographed singing an encore performance of ‘We Will Rock You’ while perched on the shoulders of Darth Vader (who’s probably a roadie). Tom Callins, a US photographer, said: “It was pandemonium. Everybody just thought it was so funny, so Freddie. It was so over-the-top.” That’s Freddie Mercury for you, ladies and gentlemen, he can captivate his audience easily with his flamboyant personality and boundless creativity!