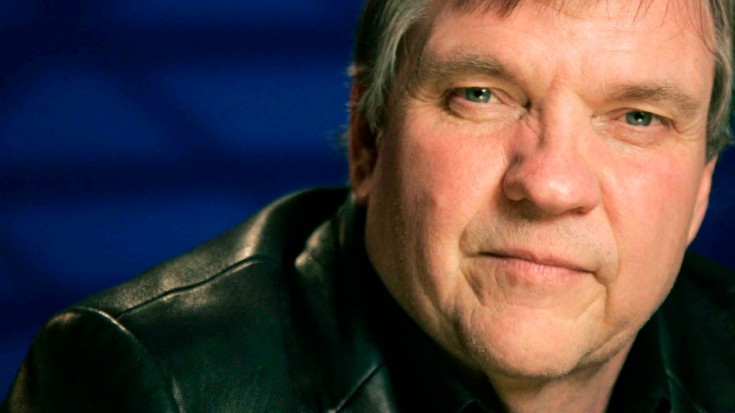 The name Meat Loaf itself has an interesting story behind it.

Born Marvin Lee Aday in Dallas, the nickname “Meat” was given by his police officer father when he has allegedly taken one look at his son and said: “He looks like meat.” As a child, he was bullied for his weight.

Eventually, the kids quit calling him Marvin, and the nickname Meat Loaf had long since stuck, but in 1984 he went before a judge to legally change his name to Michael. Other incredible stories with Meat Loaf are listed below,

1. Meat Loaf on the The Rocky Horror Show

In 1973, Meat Loaf was cast as Eddie and Dr. Everett Scott in the Roxy Theatre’s production of The Rocky Horror Show. When he met the artist his Eddie character was based on (Elvis Presley), Meat Loaf told Fuse:

“He came to see Rocky Horror, and everyone else who had played Eddie over in England had tried to do an Elvis impersonation,”

“That’s what they said to me when we started doing it out in L.A., but I looked at them and go, ‘Why would you want an Elvis impersonation? Why wouldn’t you want Eddie to be his own human being?’ They go, ‘Well, OK,’ and that’s what Elvis talked to me about. He goes, ‘Well, I hear everyone wants to do an Elvis impersonation [for Eddie], but you didn’t.’ The one thing I did say to him was, ‘No, because there’s only one you and only one me.’ That’s all I said to him.”

Meat Loaf first met songwriter Jim Steinman when auditioning for Steinman’s musical More Than You Deserve at the Public Theater in New York. Meat Loaf got the job and they instantly wanted to collaborate.

“People kept saying, ‘Listen, this guy Steinman, you can’t be with him. You’re too good,'”

“I went, ‘You people have no idea. You’re in the music business, and you’re telling me that? You people don’t know what you’re talking about. This guy is an absolute genius. And me and him together, we’re an unstoppable force.'”

And they were, Steinman helped Meat Loaf on Bat Out of Hell and other albums. They remained friends until Steinman’s death in April 2021. Meat Loaf said Steinman’s nurse left him a message saying how much he loved him,

“She said I was the one person he needed more than anyone else in his life. I don’t want to die, but I may die this year because of Jim. I’m always with him, and he’s right here with me now. I’ve always been with Jim and Jim has always been with me.”

Prior to Bat Out of Hell, when Ted Nugent‘s rhythm guitarist and singer, Derek St. Holmes, quit the band in the middle of recording the 1976 LP Free-for-All, producer Tom Werman brought in Meat Loaf, paying him just $1,000 to sing lead on several songs.

The LP performed well, reaching No. 24 on the Billboard 200 and becoming Nugent’s first record to go platinum. Nugent wrote on Facebook following the news of Meat Loaf’s death.

“Rest in peace my soul-brother soul music blood brother! A great man great American rocksolid in the asset column of the American dream! The wonderful Meatloaf force of nature will be with us forever.”

There was a time when Bat Out of Hell, which was produced by Todd Rundgren, was difficult to sell. Luckily it all changed, thanks to Meat Loaf’s friendship with John Belushi. Meat Loaf served as an understudy on a production of National Lampoon’s radio show. Following the album’s release, Belushi and Gilda Radner insisted to non-fan Lorne Michaels that Meat Loaf should appear on Saturday Night Live.

After seeing the show and hearing the lyrics to “Two Out of Three Ain’t Bad” —“You’ll never find your gold on a sandy beach” —a radio programmer in Buffalo named Sandy Beach decided to put the song in rotation. Meat Loaf told Classic Rock Revisited:

“It became No. 1 in Buffalo in about four seconds. Before Saturday Night Live and Buffalo, we had sold no records. This was the end of May, and by the beginning of July, we were platinum. By the end of July, we were double platinum and were selling over 700,000 copies a week.”

This classic Meat Loaf’s 1993 comeback hit has confused many fans over the years with its lyrics. In 2014, ​Meat Loaf recalled that it was exactly what Steinman was worried about.

“When we were recording it, Jim brings up the thing – he says, ‘People aren’t gonna know what that is.’ I said, ‘Of course they are. How can they not know?’ He goes, ‘They’re not gonna.'”

The answer was in the lyrics all along. He explained,

“It’s the line before every chorus. There’s nine of them, I think. The problem lies because Jimmy likes to write, so you forget what the line was before you get to ‘I won’t do that.'”

In 1999, Meat Loaf was cast in the movie Fight Club to play Bob Paulson, a former bodybuilder who battles testicular cancer as a result of past reliance on steroids. He had to wear a suit for the role that was heavy.

“The breasts were 28 pounds. Ever since then, I see women with large breasts… and I go, ‘Oh, God, their neck’s gotta be killing them.'”

In 1991, Meat Loaf earned the title “Coach Meat” when he was offered to coach the JV softball team at his son’s high school. It didn’t matter if he actually knew much about the game because he contributed to the team spirit.
According to writer Jen Carlson, who was a freshman on the team. He even taught them a new rallying chant:

Meat Loaf kept his rock star persona out of the picture except for one time on a bus after the team’s first win, when he began singing his major hit “I Will Do Anything for Love (But I Won’t Do That).”

8. Meat Loaf did not eat meat

Meat Loaf lived as a vegetarian in contrast with his name from 1981 to 1992, which according to him caused some controversy. He told Entertainment Weekly in 2003:

“I was a vegetarian for 10 years. There’ve been vegetarians who wouldn’t speak to me because of my name. I was sitting with Jon Bon Jovi at one of those awards things, and I say, ‘Oh, man, I love k.d. lang. I’d really like to meet her.’ They went to find out if it was OK, and she goes, ‘No. His name is Meat Loaf.’ I stopped being a k.d. lang fan after that.”

9. Meat Loaf as a father-in-law

In 2011, Scott Ian, rhythm guitarist and cofounder of Anthrax, married Meat Loaf’s stepdaughter, Pearl Aday. Even if they’re already a family, he remains a giddy fan at heart. Scott said in a 2014 WAMC Roundtable interview:

“There’s still that part of me, there’s still that 13-year-old kid sometimes, you know, I can’t help it. It was such a big thing in my life, at that point in time. It’s just trippy for me, that’s the only way I can put it. Sometimes it’s surreal that you’re sitting, watching a football game with Meat Loaf.”

Despite all the popularity and success, Meat Loaf was never comfortable with being famous. In 2011, he said:

“I don’t really relate to myself in any form or fashion as any kind of star. And that’s what I had a nervous breakdown about because they kept putting out ‘new star,’ and I kept saying to the Epic [Records] people: Do not put the word ‘star’ in an advertisement, put ‘artist,’ put ‘performer,’ put anything but ‘star,’ because that’s not what I’m about.”