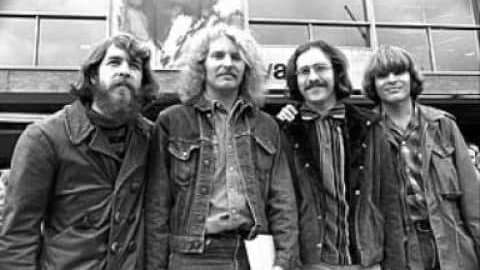 Creedence Clearwater Revival was on a roll in 1969. They released a trio of albums that cemented their spot as legends. The last LP of that year was “Willy and the Poor Boys”, which featured the classic hit “Fortunate Son”.

Here are ten interesting facts about it:

1. It’s a protest song against the Vietnam War and the establishment.

“The song speaks more to the unfairness of class than war itself,” John Fogerty said. “It’s the old saying about rich men making war and poor men having to fight them.”

“When I felt it was about ready to hatch, I went into my bedroom and just sat down to write,” he told American Songwriter. “The whole thing happened in about 20 minutes. That just poured out.”

3. It was used for a Wrangler jeans commercial in 2000, but they only featured the first two lines.

It made Fogerty furious. “If there’s some other song that was probably just a simple rock ‘n’ roll song, maybe I wouldn’t feel so strongly,” he admitted, “but ‘Fortunate Son’ has a real point to it.”

4. It was inspired by those close to politicians.

“Julie Nixon was hanging around with David Eisenhower, and you just had the feeling that none of these people were going to be involved with the war,” Fogerty told Rolling Stone. “In 1969, the majority of the country thought morale was great among the troops, and like 80% of them were in favor of the war. But to some of us who were watching closely, we just knew we were headed for trouble.”

5. In September 2020, President Donald Trump used it at one of his rallies.

It angered Fogerty, and he took to Facebook to speak out about it.

“I was very upset about was that people of privilege – in other words, rich people or people that had position – could use that to avoid the draft,” he wrote. “I found that very upsetting, and that’s why I wrote ‘Fortunate Son.’ That was the whole intent of the song, the inspiration for the song… I find it confusing that the President has chosen to use my song for his political rallies when in fact, it seems like he is probably the Fortunate Son.”

6. Bruce Springsteen, Dave Grohl, and Zac Brown covered the song at the November 2014 Concert for Valor in Washington D.C.

They received criticisms, but Fogerty defended them.

7. Fogerty teamed up with Grohl to record it for Fogerty’s 2013 album “Wrote a Song for Everyone.”

It opened the LP.

8. It was used in several video games.

9. It was often misinterpreted as a patriotic anthem.

That was why CCR was able to perform it on The Ed Sullivan Show, because the producers failed to realize that it was actually a protest song.

10. Even though Fogerty wrote this, he doesn’t own its publishing rights.

He lost the publishing rights to all the songs he wrote for CCR in his contract with Fantasy Records.